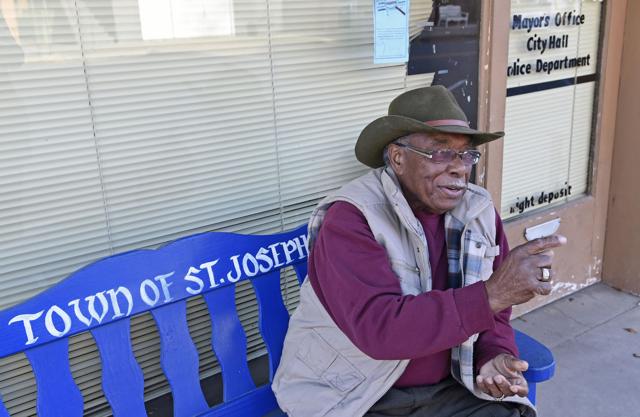 St. Joseph residents soon may be able to drink water from the tap for the first time in nearly a year.

Gov. John Bel Edwards issued on Dec. 16, 2016 an emergency order to not drink, brush teeth, bathe or cook with the town’s drinking water after elevated levels of lead were found. Even in small amounts lead causes irreversible brain damage in children.

“Last year people doubted that a new system would ever be installed,” said resident Sam Courson. “People here have been promised a lot of things that never came through … but this is moving right along.”

By Christmas, individual homes and businesses should be connected to the town’s system. Then, the Louisiana Department of Health will need to retest for lead. The town’s residents – 1,029 at last count – should be able to safely drink water from the tap again by Mardi Gras.

Then they can start worrying about how to pay for it. Grants and taxpayers footed the bill – about $9.5 million or about $19,000 per customer when construction, testing, transportation and other costs are included. Now the customers are going to have start paying.

Pipes between the meter and into the house, for instance, are the responsibility of the homeowner. If testing finds lead in those segments, the building’s owner will have to take remedial action, which could include replacing all the plumbing.

The Rev. Israel Ross said $12 doesn’t sound like much. But nearly 40 percent of the town’s households live below the poverty rate. The median household income is $16,923 or about $1,400 a month.

“It’s going to be a sacrifice and many of them are going to need some help,” Ross said.

Mayor Elvadus Fields Jr. said he’s frustrated by the higher rates but has no options. “There’s isn’t a thing we can do for them. Let me tell you why: The town is broke,” he said.

The town’s financial situation is what caused the problem in the first place, said David Greer, who the state brought in to administer St. Joseph and sort out its finances.

Sales taxes are dwindling, very little property taxes are collected and only some occupational license revenues are available, he said. The water and natural gas systems have, for a long time, been the largest source of revenues for the town. Monthly utility payments were routinely diverted to pay for street repairs, law enforcement and other activities, instead of maintaining the system.

Leaks occurred causing water pressure to go up and down, which in turn weakened the pipes and various repairs over the years, sometimes causing metals to flake.

Greer put an end to using utility payments to cover other expenses.

The Louisiana Department of Health swooped in and began testing all 470 homes, businesses and schools. Twenty-two percent were found to have water containing lead levels above the acceptable standards.

Ninety-eight homes had unsafe levels of lead in their drinking water – one had 1,810 parts per billion.

Most of the structures where lead was found were built before the 1970s when lead-based paint, lead solder and lead pipes were commonly used.

The town has been running zinc orthophosphate through the new system for several weeks now. The chemical coats the pipes and protects against corrosion, said Dr. Jimmy Guidry, the state’s health officer.

“It was always up in the air where the lead came from,” he said. Lead wasn’t found in the water coming out of the aquifer.

Guidry suspects lead leached into the system from corroded repairs on the pipes, which have now all been replaced except for the sections between the meter and building – the owner’s responsibility.

If the readings get low enough, any residual lead could be handled with filters and other protections less costly than replacing all the plumbing, Guidry said.

Mayor Fields is leading an effort to find grants and low interest loans that building owners can take out if lead levels remain high in their structures.

He’s also trying to find funding for homeowners who need to replace sludge-filled water heaters but can’t afford it.

Lady Carlson with Together Louisiana said the faith-based advocacy group, which helped draw attention to St. Joe’s water problem, is working with environmentalists to develop a comprehensive plan to tackle similar water issues across Louisiana before they become a crisis.

“Public infrastructure as a whole has atrophied to the point where we need to make significant investments over time as we’re able to do it,” Edwards told KNOE-TV last week. “But we are more constrained than we’d like to be and therefore cannot invest in all these improvements like we’d like to.”